Barefoot Lawyers International is a global capacity building organization dedicated to innovative solutions for the legal empowerment of all, especially the poor and vulnerable.

What is the outcome of $57 million over 18 years? - Showcasing the more successful Legal Tech A2J Projects in the US

I have previously blogged about projects under the US's LSC (Legal Services Corporation) Technology Initiative Grants (TIG), for example Legal Aid websites, documentation assembly, technology to promote pro bono work, and others. Having followed the trends and been involved with several TIG conferences, now that the current US administration has defunded the TIG (and much of the LSC), I thought it might be a good idea to consolidate some of the better and more successful projects out of the TIG throughout its lifespan. This can help practitioners in developing countries conceptualize technology strategies for access to justice through technology.

Hot off the Press: Global Fund's report on achieving equal access to justice for all by 2030

This timely paper by ODI  reviews the experience of global funds and explores whether lessons could usefully be applied to supporting Sustainable Development Goal (SDG) 16.3’s commitment to equal access to justice for all by 2030. Findings: (Access the paper here.)

Email ThisBlogThis!Share to TwitterShare to FacebookShare to Pinterest
0 comments

The Asia Access to Justice Week is a BABSEACLE initiative held annually in Chiang Mai Thailand. Every year, people gather and participate in various activities focusing on the strengthening and supporting greater access to justice for the vulnerable, marginalized and poorer members in our communities. These activities include field trips, training workshop, the Asia Justice Marathon, and a live theater production. To connect into the global community, in 2018, BABSEACLE will host The Global Pro Bono Run (Walk), the inaugural virtual run/walk.

Email ThisBlogThis!Share to TwitterShare to FacebookShare to Pinterest
0 comments

Gathering Dust on the Web: How relevant are reports on legal tech, and others?

How do worthy report findings transition from a shelf or inbox into actionable projects and meaningful change? Speaking with academics and practitioners alike, I have come across this question in diverse settings over the past year, where a seemingly good idea or technology is suggested through a feasible and well thought-out proposal yet never manages to lift off and help those it was made for. While I cannot enumerate all the potential reasons a good idea might fail to be implemented, a couple major themes have risen over the past semester: identifying and engaging with all stakeholders, reaching out and disseminating findings, and maintaining communications are all vital activities for project implementation. However, a frustration continues to build as I listen to my peers make yet another project recommendation: how many recommendations and findings will be implemented or used to stimulate change?

Email ThisBlogThis!Share to TwitterShare to FacebookShare to Pinterest
0 comments
Filed Under: Tech 4 Dev/ICT4D

One of my UC Berkeley iSchool ICT4D students had written this piece a few years ago, but I find it a good reminder of the business thinking we can apply to implementing technology projects for access to justice.

Last week, I stumbled upon an inspiring article about the Indian sanitary pad revolutionary: Arunachalam Muruganantham, who has developed a simple machine that can make low-cost sanitary pads. Arunachalam’s invention was aimed to help the 88% of Indian women, who were using dirty cloth, leaves and even ash during their menstrual cycles. Not only do these machines have the potential to improve women’s health and hygiene, but they can also empower women in small communities to become entrepreneurs and create and distribute their own brand of sanitary napkins. If you google his name you can find a ton of articles about this man and his great story (there is even a documentary film made about him!), so my focus in this blog is to highlight what I think is a big factor in Arunachalam’s success: applying the lean startup principles of customer validation and minimum viable product (MVP) to a development project.

Email ThisBlogThis!Share to TwitterShare to FacebookShare to Pinterest
7 comments
Filed Under: Tech 4 Dev/ICT4D

Crowdsourcing 2.0: Why Putting the Slum on a Map is not Enough for A2J

There was a time—not too long ago—when informal settlements the size of small cities were basically invisible. Beige-gray fields, intercepted by thin blue lines, signifying water, and several thicker, windy white lines that stood for major roads, would pop up on the computer screen when searching for infamous slums such as “Kibera” on Google Maps. The information void stood in stark contrast to the hundreds of thousands of people living in Kibera, ironically tucked away between some of the city’s most valuable and celebrated resources: the Royal Nairobi Golf Club, Ngong Forest and the Nairobi dam.

Email ThisBlogThis!Share to TwitterShare to FacebookShare to Pinterest
22 comments
Filed Under: Tech 4 Dev/ICT4D

In Part 1 I discussed the value of participation in international development and how it can be problematic.Can leveraging the value of openness in technology create solutions to allow participation to be done in the right way? Perhaps these networking tools that foste rparticipation somehow allow for greater inclusiveness. Well, evidence suggests the same pitfalls of participation in development can be found in a virtually networked community. Online communities become a reflection of the offline society of which it belongs. Tools that facilitate openness and collaboration are subject to reflectingexisting authorityhierarchies that affect who participates and the type of information that is shared.

Email ThisBlogThis!Share to TwitterShare to FacebookShare to Pinterest
0 comments
Filed Under: Tech 4 Dev/ICT4D

Private companies and public interest: an oxymoron for A2J?

With this blog post, I want to speak not only about ICT4D but more generally about development. The notion of development has interested me for several years. It can be very difficult to give an exact definition of what development is. For me, when I think about “development”, I refer to the development of societies and of all nations in the world. I don’t have a different mental image for “development” whether it is for southern or northern countries. In my mind development is above all else the process that able a Nation to develop itself in order to improve its economy and the living conditions of its citizens. In the northern countries, it was the industrial revolutions in the XVIII and XIX centuries that enabled these Nations - by a better understanding of how scientific knowledge can be transformed into real applications that improve the economy – to increase their GDP, more than in the 1800 previous years. For several reasons, including colonization and decolonization, other Nations in the world, especially in Africa and Asia, didn’t be able to use this phenomenon of industrialization to develop themselves. Today, several countries in Asia, like India and China are catching up with northern countries. Tomorrow, I am sure it will be the same for African countries. The world has changed a lot since the XIX century, and today the solutions and the methods available for a Nation in order to develop itself are thus very different. 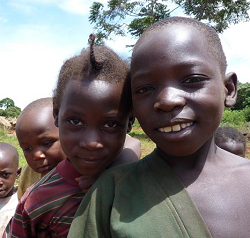