Crowdsourcing 2.0: Why Putting the Slum on a Map is not Enough for A2J

There was a time—not too long ago—when informal settlements the size of small cities were basically invisible. Beige-gray fields, intercepted by thin blue lines, signifying water, and several thicker, windy white lines that stood for major roads, would pop up on the computer screen when searching for infamous slums such as “Kibera” on Google Maps. The information void stood in stark contrast to the hundreds of thousands of people living in Kibera, ironically tucked away between some of the city’s most valuable and celebrated resources: the Royal Nairobi Golf Club, Ngong Forest and the Nairobi dam.

Over the past few years,participatory mapping has come a long way in Kenya and crowdsourcing geospatial data has entered the ICT4D vocabulary. Aside from reviewing some of the milestone initiatives in this blog piece, I would also like to make the case for a second generation of geospatial data collection—one with more purpose and accountability.

In the not-too-far past, Google-ing Kiberadid not reveal much information about the slum, but more significantly, information also lacked within the slum. In the eyes of the government, the slum did not exist or matter and only few stories, usually about gangs and murders with attention-grabbing sensational headlines, were deemed newsworthy. For relevant and current happenings, residents would therefore consult their social networks: neighbors, friends and family. As the extensive literature on social capital and intelligence has shown, who you know (rather than what you know) contributes enormously to slum dwellers’ complex networks of resilience.

But there are situations when those networks are simply not enough.

One of those situations presented itself on the night of the 30th of December 2007. After Kenya’s general election on the 27th of December, hopes—and polls—were at a peak for the opposition party’s RailaOdinga. But after a three-day delay, incumbent President MwaiKibaki was unexpectedly pronounced winner. What exactly happened next and who is to blame continues to be widely discussed, but what we do know today is that inflammatory text messages and emails had played a major role in inciting the violence that lasted for two months, killed over 1,000 persons and displaced 350,000. Most of what would later be called “ethnic cleansing” took place in informal settlements, including Kibera, the same areas with the least information. Nobody knew whether and when it was safe to step outside the house. After only several days, a small group of programmers released a software that would use the same tactics as the perpetrators—SMS and emails—to create an alternative information-sharing platform. Ushahidi, Swahili for “testimony,” mapped reports of crime and violence that could easily be submitted and accessed online or by mobile phone. This “politics of witnessing” has since spread as a crisis-mapping tool all over the world. 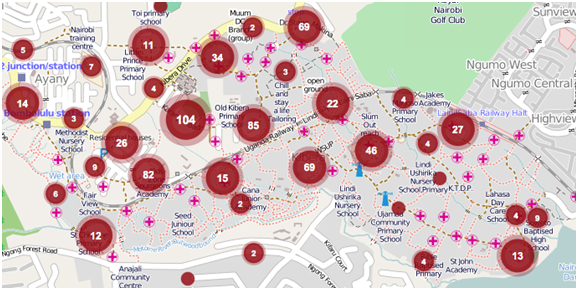 Figure 1: The Ushahidi Platform places reports submitted via SMS and email on a map.

Ushahidi shined the light on a long-existing problem that would finally be addressed: the lack of information on and for informal communities. Although constituting a significant urban demographic in cities of the Global South—and the majority in some, including Nairobi where an estimated 60% of the population live in slums—slum dwellers are often ignored in planning processes and budget allocations.

With the goal to change the situation by literally putting Kibera on the map, an international development practitioner and a programmer founded MapKibera in 2009. Through support from local techies who helped trainKibera residents in using OpenStreetMap(OSM) techniques—including GPS surveying and satellite imagery digitizing—Kibera began making an appearance. In the years to follow, the Voice of Kibera community news website and the Kibera NewsVideo Network journalism project followed, developing atop the MapKiberainformation on OSM. 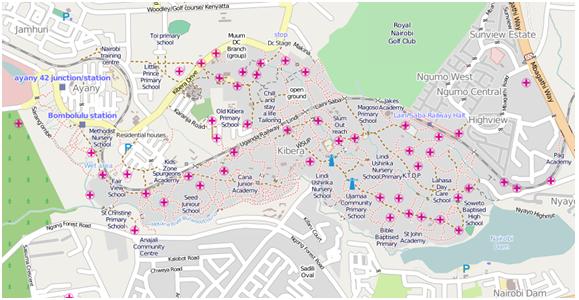 MapKibera was the first of its kind. By training local residents in geospatial data collection and visual storytelling through photography and video, MapKibera significantly contributing to the democratization of media. It also made international news and brought much-needed attention to the Kibera slum. Kibera’sdata and founding members traveled the world. It was actually at one of those trips to the Massachusetts Institute of Technology Media Lab where I first heard about the initiative. MapKibera’s approach and legacy for the ICT4D community cannot be denied.

But is information enough? The most recent decision of the City County Council of Nairobi not to include informal settlements in the new Master Plan of the city—the first since 1973—indicates that it might not be. With a saturated map available on OSM, neither the city nor residents seemed to make much use of it. The City insisted on a dearth of quality information, while residents already knew the locations of basic mapped amenities such as schools, taps and pharmacies in their neighborhoods.

What was needed was information that would allow slum dwellers to claim political agency and their citizen rights. The result was the Spatial Collective, a Mathare-based social enterprise, founded in 2012 by several experienced participatory mappers. Similar to MapKibera, the Spatial Collective benefits from Kenya’s 70%+ mobile phone penetration rate and widely available cheap Internet service to tap into an already existing information system to access local knowledge. They use this information to map slums’ resources but also their most basic needs. Crime and rape reports, for instance, allow for specific interventions such as installing lamps for safety.

As we forge ahead with increasingly popular crowdsourcing initiatives, I would like to extend my recommendation to emphasize not only data collection but purpose-driven data-collection that targets one particular goal at a time. A foreign-founded and –funded initiative, the Spatial Collective has drawback of its own. But if there is anything we have learned from ICT4D projects by now, it’s that nothing’s perfect.

Christina Gossmann is a Master of City Planning student at UCBerkeley. Before returning to graduate school, she worked as a freelance journalist and researcher in cities of the Global South. Email her at christinagossmann@gmail.com and follow her at @chrisgossmann.