For every technology there is a gap between the moment of its emergence and the moment of its effective use in societies. This is what is called in economics the cycle of consumer adoption (or product life-cycle management). A new emerging innovation can grow for a very long time before have been adopted by a majority of the population. Of course the percentage of adoption (and the growth of this percentage) can be very different according to regions and countries, and the poorest countries are often late regarding the more developed countries. For this reason, if in a country (developed or not), two technology T1 and T2 have a percentage of adoption respectively of 70 and 7%, their potential utility on the population at a moment t are radically different. Indeed if an innovation can work only on the innovation T2 (thus affect only 7% of the population), its impact on development will be very weak, even if this technology T2 is the newest and revolutionary.

This percentage of adoption is very important to evaluate the potential impact of a technology on development. To a first approximation, it seems that the more a technology is distributed in a country, the more useful it can be. Taken as true this assumption, it would mean that if we can increase artificially the percentage of citizens that have access to this technology, we can also increase in the same way its potential. If we think that smartphone is a fertile ground for innovations and development, the last assumption means that we should distribute smartphones to some people, in order to help them increase their income and get employment. Unfortunately we know that things are not so simple: the adoption of a product or a technology is not only about having it in your hands. Even if you have access to it and you can afford it, it doesn’t mean that you can use it. Sometimes there is not the national infrastructure needed and it is obviously useless. But there are a lot of other reasons for a technology not to be adopted, and it is not always about money. Sometimes technologies are just not suited to your needs; sometimes you need a learning to use it efficiently. ICDT4D projects, even with the best intentions in the world, can’t really work if they are just about products delivery without what we can call “after sell services”.

Maybe the newest is not always the greatest and the good old technologies can be more suited to the situation of development? In other words, we should consider also the degree of mastery of a technology. The more somebody is mastering a technology, the more he is able to use it deeply to meet his needs, and the more he can innovate himself. There is a huge difference between having something in his hands, knowing how to use it, and knowing how to create innovation with it. The advantage of ‘old’ technologies is that people had have more time to become familiar them a so have a higher degree of mastery than for the newest technologies. In Japan, when smartphone have emerged, a lot of people didn’t want them because they mastered so well their old feature phone, that it was virtually like a regress for them. In a lot of companies in the word, computers still use very old version of software and operating systems because employees master them perfectly and a change for the newest versions might decrease the productivity a lot. This phenomenon is exactly the same in developing countries; people are sometimes not ‘ready’ for the newest and the more sophisticated technologies.

Maybe, rather than wait for new infrastructures and big percentages of adoption for new technologies, we should focus on existing and fully adopted and mastered technologies. It is my firm conviction. ‘Old’ technologies like basic phones with only SMS and phone call have three advantages in comparison with smartphone with 3G in developing countries: the infrastructure and the network is well implemented, the product life-cycle is very advanced (with 650 million units, Africa has overtaken the United States and Europe in terms of mobile phones) and a lot of people master them perfectly. 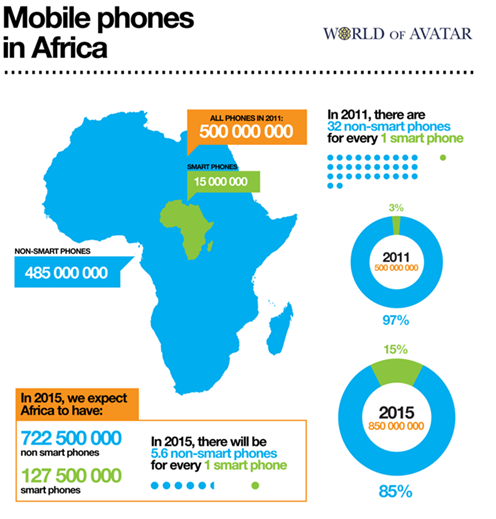 
Thanks to these three advantages, mobile phone is a great fertile ground for innovations and development both from the top and the bottom of the pyramid. The case of mobile money transfer is a good illustration. Today, a large number of Africans live in big cities and send money weekly to their parents remained inside the country. Because they don’t have any bank account, they have to bring the money themselves or entrust a wad of cash to a bus driver that can put it back to a relative, once the bus arrived at the village. To overcome this difficulty, Safaricom (a leading mobile network operator in Kenya) launched M-Pesa in 2007 (pesa means money in Swahili) with the help of Vodafone and the British government. Today for example, 90% of Kenyans have an M-Pesa account. This allows them to pay for vegetables at the market, the electricity and school for their children. It also facilitates economic dynamics. According to Gallup (a research-based, global performance-management consulting company), 66% of money transfers in Kenya are mobile (2% by banks) and the African continent is leading for this kind of transaction.

Mobile phones are also a source of resourcefulness for the bottom of the pyramid, i.e., for the local populations themselves. For example, a Senegalese called Abubakar Sidy Sonko is the inventor of the platform Mlouma that connects producers and buyers of agricultural products through SMS. Senegalese onion industry was the first to launch. The idea is to make direct contact with the producer groups and wholesalers, without intermediaries. More than 3,000 onion growers have already taken advantage of this service, which will allow them to better sell their products and avoid losing a portion of their crops due to bottlenecks in the traditional distribution channels. Another interesting example is the innovation of a Ghanaian social entrepreneur called Bright Simons with mPedigree. This service allows Africans to verify the authenticity of a drug through the code written on the box and a free SMS sending. This project was tested for the first time in Ghana in January 2008. It is currently being deployed in Niger, Tanzania, Kenya, Uganda and Cameroon.


Classic mobile phone and SMS mean to be sometimes very powerful for the development of developing countries. Nevertheless, I think that mobile phone can’t do everything. If mobile technologies have the ability to change the way people communicate in developing countries, these effects are not uniformly distributed. Women, and in particular, women who live in rural areas, appear among left behind in the mobile revolution. The most vulnerable family members do not always benefit from new technologies, which often remain controlled and owned by the head of the family. If mobile technology offers some women a greater social and economic freedom, for others, it also confirms the supremacy of social relations and inequity. Equipping people of poor countries with mobile is not a solution to poverty or gender inequality. Therefore mobile phones can’t replace all natural communications between people. There are social and cultural barriers that prevent some populations from accepting the phone as a legitimate means of communication. In many oral cultures, face to face is very important, and mobile phone can’t replace it. In conclusion, mobile phone and ‘old’ information technologies can assist in the development, but they are not *the* development, and they are not automatically synonym of social progress. Financial capability and education become paramount to take advantage of phone's capabilities and to enable a sustainable development for everyone.